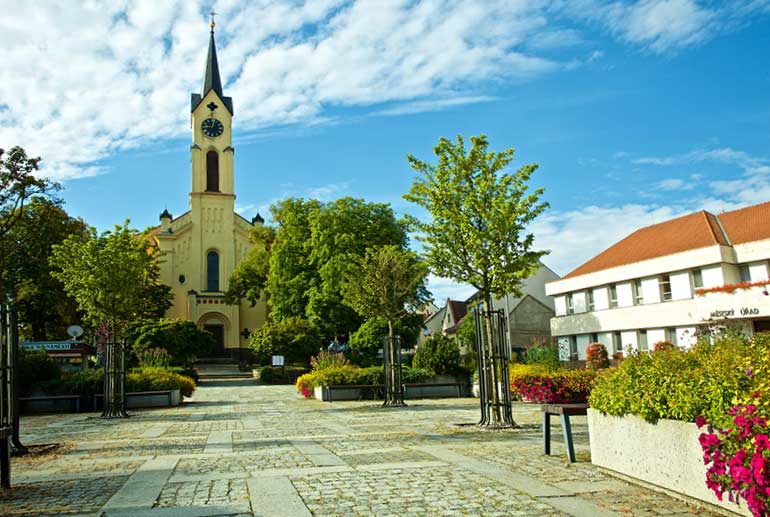 The northern gate to South Bohemia

The history of Milevsko town and its most important monuments

The immediate surroundings of Milevsko were already settled in the Stone Age. The first written record of the town comes from 1184 mentioning the seat of a wealthy nobleman Jiří from Milevsko who established a Premonstratensian Monastery here in 1187. Monks led by an abbot Jarloch, who followed up the tradition of Chronica Boemorum from 1167-98, came to Milevsko from Želiv. In the following period the Monastery was one of the richest in Bohemia and became the cultural and economic centre of a large area. The history of the town has been inseparably connected to this Monastery. 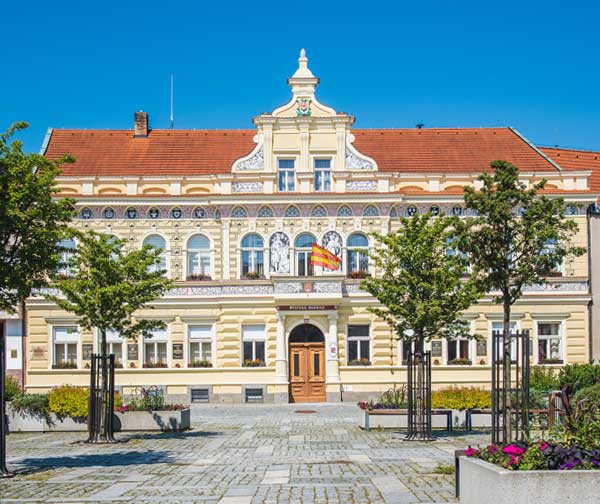 Its front is decorated with sgraffiti dating back to the beginning of the 20th century. Welcome to the Neo-Renaissance! It was Oldřich Pejša, a painter from Milevsko, who decorated the front of the Town Hall with sgraffiti in 1937. Today it is the seat of the municipal authority. 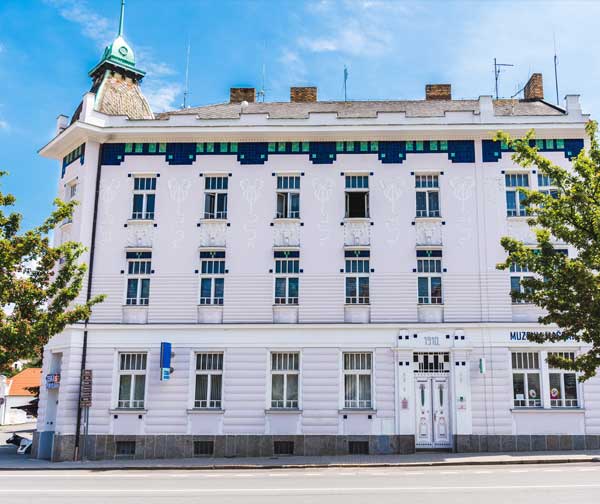 Located opposite the Town Hall, the Savings Bank is the most beautiful building in Art Nouveau style in the town. Today there is a Tourist Information Centre and Museum of Parade Costumes in Milevsko located here. 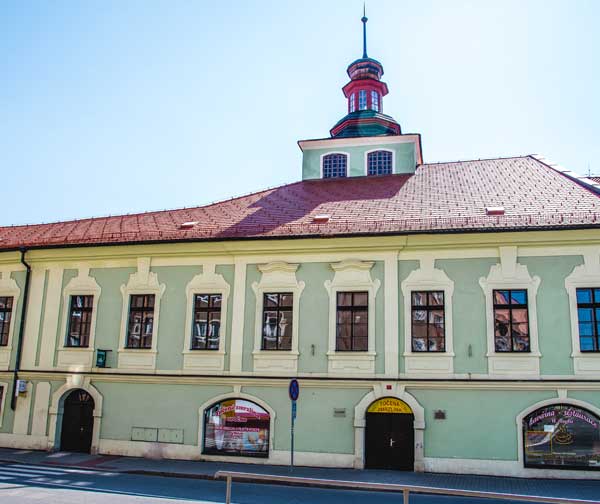 It used to be the seat of the district court in the 19th century. This 17th century building with a typical small tower accommodates a municipal library and art gallery and it is one of the oldest buildings in the town.

The Church was built in 1886 and is situated on E. Beneš Square and its tower is the second symbol of the town besides the monastery basilica. 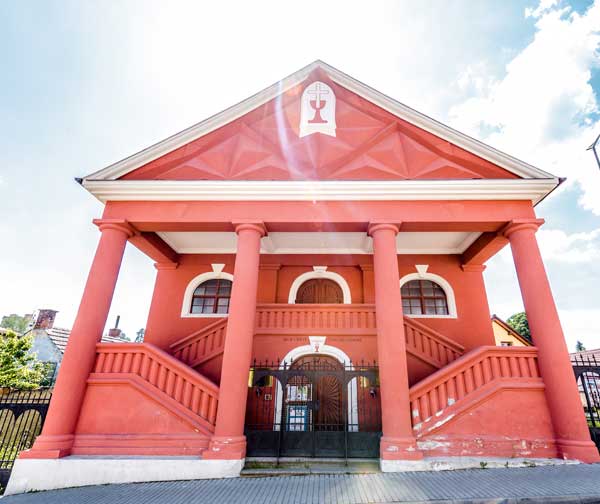 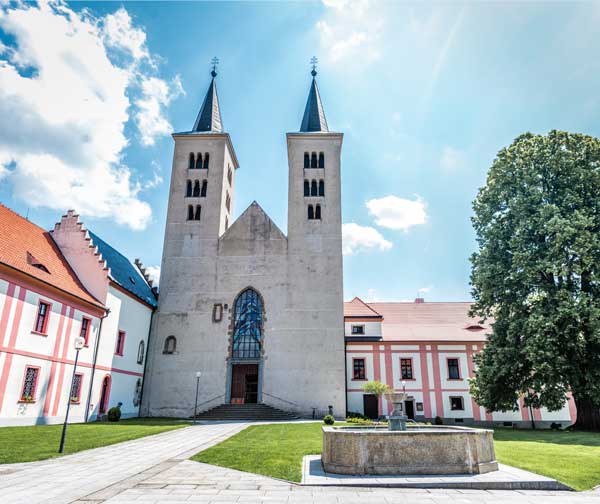 It is one of the most valuable monuments in Bohemia built in Romanesque style. It is the oldest monastery and at the same time the only Romanesque basilica in South Bohemia. The Monastery was probably established in 1187 by a nobleman Jiří from Milevsko. 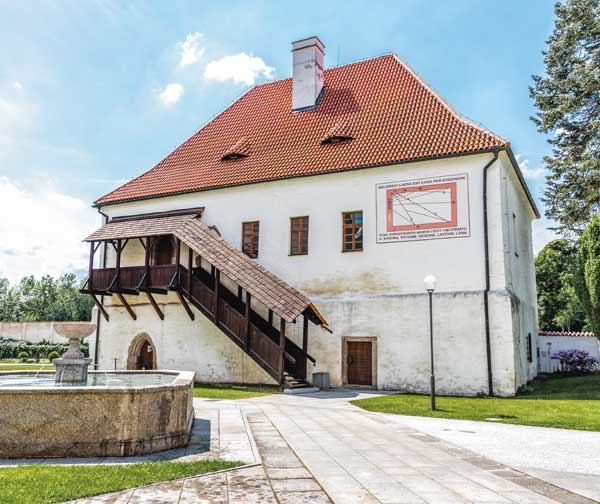 Founded at the end of the 14th century and later renovated in the baroque style, the Latin School accommodates a monastery library with books from the 16th to 19th century and a comfortable hall where cultural events are held. On the ground floor there is a lapidarium and art gallery. 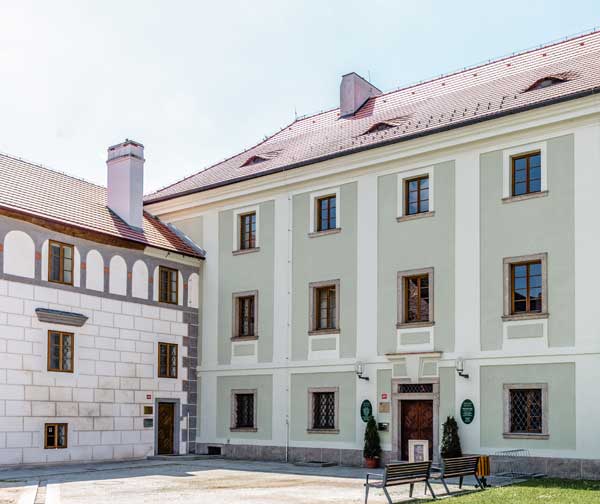 Located on the 2nd monastery courtyard, the Museum is a unique place combining history, traditions and the present. On the ground floor there is an exibition related in particular to the history of the town and the monastery, the first floor serves as a museum for the whole family and on the second floor there is an exhibition hall.

is situated on the second monastery courtyard. In the basement and on the ground floor you can see expositions related in particular to the history of the town and monastery. The first floor serves as a museum for the whole family - there is a military corner, our grandma’s room and puppet room. On the second floor there is an exhibition hall where short- term exhibitions are held on a regular basis. You can find the opening hours and events organized in the Museum at www.muzeumvmilevsku.cz. 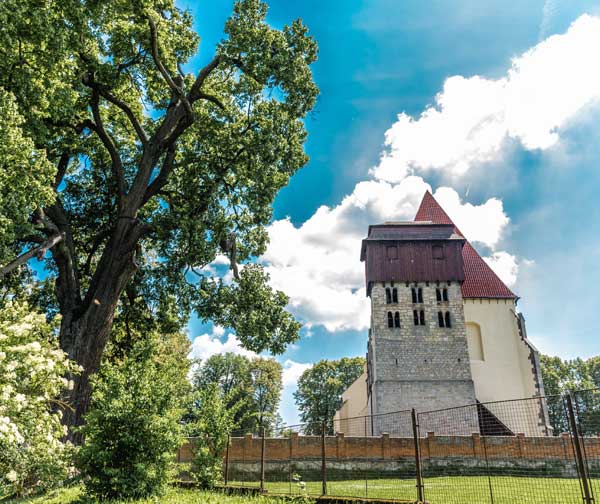 in the vicinity of the Monastery. It has the oldest walls in Milevsko town, as the Romanesque tower on the west and northern side of the nave were built already in the end of 12th century before Jarloch started building the monastery.

Where to see culture in Milevsko

House of Culture makes use of its extensive building divided into a historical and modern part (built in 2006). There are four halls, several clubrooms, library and restaurant. In the summer you can visit the amphitheatre in the gardens and there is a summer restaurant too. Local popular music concerts and open -air cinema are popular among people and frequently visited. For more information about the House of Culture please visit www.milevsko.cz.

Cinema in Milevsko with an auditorium for 152 persons is equipped with digital 2D and 3D projection technology with seven -channel sound.

M gallery is located in the old town hall building. In the old arched space there is a special atmosphere of its own which you can feel during exhibitions, as well as club cultural shows or social events which are held here.

The costume parade in Milevsko is one of the oldest in the Czech Republic. People wearing parade costumes have been walking through the town since 1862. The tradition is based on medieval Masopust games. The parade always has a certain theme which is often related to important events in the town, state or world, for example in 1875 when the construction of the local railway began the “first” train went through Milevsko and in 1991 the topic was “a big smaller privatization”. There were 1,248 masks in the costume parade in 2016 resulting in it being entered in the Czech Guinness World Records as the biggest Czech costume parade. Moreover it has been recorded in the list of the Nonmaterial Property of the Traditional Folk Culture of the Czech Republic.

Museum of Parade Costumes in Milevsko

The Museum is a Czech rarity, as it is the only museum in the Czech Republic focusing on the history of local ethnographic tradition - Masopust (carnival) parades. The Museum, along with the Tourist Information Centre is located inside beautiful house no. 6 in an Art Nouveau style on E. Beneš Square. Visitors can see a collection of traditional masks from the first republic onwards, watch documentary films from Masopust parades in a small screening room and have their photos taken wearing a chosen replica of a parade costume in a photo booth. For children there is an art workshop where they can colour their own mask or colourings with a parade costume theme. Come to Milevsko town and become a part of the cheerful costume parade atmosphere.

For more information about the Museum please visit: www.muzeummaskar.cz.

Do you need information?

If you have any questions, just call or email us, and we will answer you shortly.